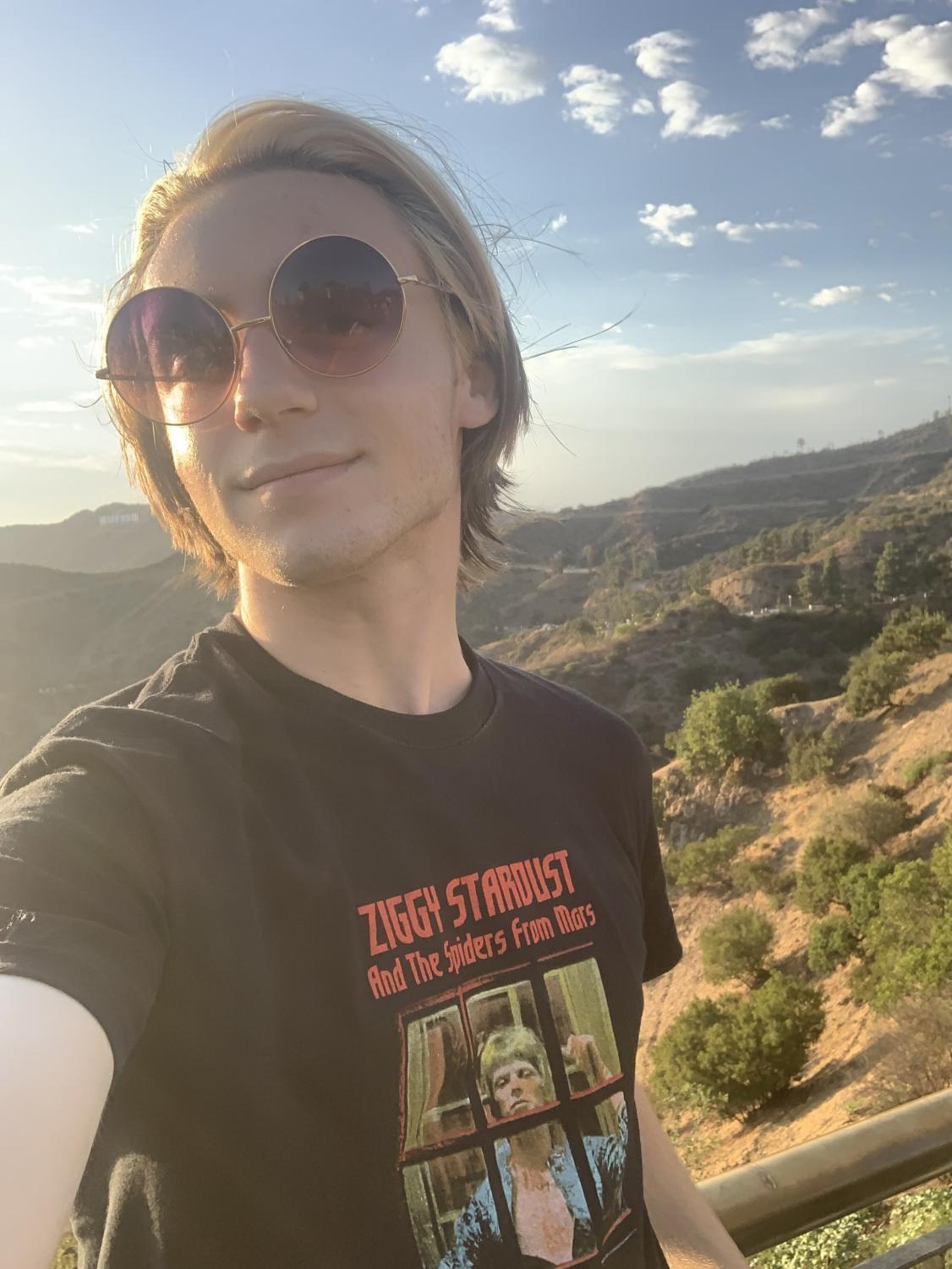 Apollo 13 may have exploded, but Apollo Hansen landed on the moon.

The 20-year-old marketing major, filmmaker and fashion developer has rebranded self-expression marketing. Currently in first year, Hansen is an intern with Nicole Landers Consulting on the ELA campus.

An astronaut in his own right, junior Robert Hansen’s interdisciplinary outlook pushes the boundaries of what the traditional marketing major looks like. Whether he’s starring as an M&M-munching softball crush in the 2021 EIV short film “Cake Bakin’ Betty,” or laying down a freestyle at 1 a.m. on the bubonic plague on his L. In the COVID era “Kali, Fornication, and the Robster”, Hansen effortlessly blends mediums as he channels his creativity into a multi-faceted career.

“There’s an art to marketing, not just in the content you create, but also in how you interact with others,” Hansen said. “I really appreciate that give and take. There’s a performative quality that I really appreciate and it’s just fulfilling.

“[Naming the brand] ‘Apollo Hansen’ was initially a practical thing,” Hansen said. “If you search Robert Hansen online, you’ll find a serial killer from the 1980s. So when I was creating my website, I was like, ‘I don’t want to compete with this guy on the search results.’

True to its name, apollohansendesign.com features Hansen’s promotional posters of past projects, album covers of his friend’s bands, and apparel for all occasions.

Much of Hansen’s merchandise, especially its signature apparel line, lives up to its design mantra: “smart designs made stupid fast.”

Many of Hansen’s shirts evoke humor through their subject matter – one can’t help but laugh at a dapper blobfish wearing a hockey half-mask or a cannibalistic Planter-style peanut that “eats the rich”. Hansen’s creations are partly influenced by his own style: a mixture of irony and sincerity.

“There’s camp, and a bit of artisanal audacity in what I wear and what I do,” Hansen said. “It’s not offensive, but I tend to go for the more colorful options while trying to have a certain level of taste. Let’s call it lively. Somewhere between country club and novelty.

In addition to its custom lines available for purchase on the site, Hansen orders merchandise for projects, organizations, and campaigns.

Katie Sirowich, a computer science student at Worcester Polytechnic Institute and a local friend of Hansen’s, commissioned a new merchandise design for the Keynotes that would be more than just their logo.

“A lot of logos and graphics lately [have] stuck with this modernized, simple and honestly a bit lifeless vibe,” Sirowich said. “Apollo has much more creative, artistic and unique designs that I think are perfect for people looking for something more expressive.”

Hansen frequently collaborates with clients inside and outside the Emerson bubble, both for small projects like the Keynotes collaboration and for larger ones. For the past two years, he has maintained a working relationship with the James Vick Foundation, a non-profit organization that provides free sports programs to young people in local communities.

“My first big break was in March 2020 with the James Vick Foundation,” Hansen said. “I’ve already done a few posters for them, but they wanted me as an independent contractor. They wanted me on the payroll.

Christian Vick, CEO of the James Vick Foundation, was introduced by one of Hansen’s high school teachers, who recommended Hansen because of his graphic design talent.

“Christian was looking for a total overhaul of his website because it was very Web 1.0, very outdated,” Hansen said. “I did the total overhaul and after that I continued to do posters and promotional material for them. [I] really enjoyed doing it; I’ve been doing this for quite a while now. »

Vick said the James Vick Foundation’s online presence has since grown with the help of Hansen’s marketing.

“[Robert] gave we a digital angle that we did not have front,” Vick said. “Other organizations may have After silver that we…but were destroy their on social media. The way we market ourselves, this looks As we have 50,000 children. And thisit is What Robert bring at the fair for we.”

Hansen’s talent is not the only impression left during his time at the James Vick Foundation. Vick holds him in high regard, impressed with the character he has shown during his short time working with the organization.

“[Robert] doesn’t give me grief,” Hansen said. “He is disinterested, It is Creative. He has the aptitude at be a self–hall. I’m going give him a assignment and hell come at the top with ideas while It is Do it is very respectful, but I still found him at be extremely innovative.”

In addition to coordinating marketing campaigns for the EVVY awards this year, Hansen is gearing up for her first independent shoot of “Chow!” in summer. Hansen wrote, directed and produced “Chow!” outside of EIV as a passion project, and designing spin-offs for the film legitimized his vision.

“I wanted [Chow!] look like something clean that felt tangible and real,” Hansen said. “I wanted there to be a bit of professionalism – the merchandise makes that possible.”

All proceeds from merchandise sales are for development. Hansen’s clothing line has always been a personal creative outlet, not a cash grab.

“I would never mass-produce shirts because I have no idea what I’m going to sell until I sell them,” Hansen said. “Sales…come in waves. There have been months where I haven’t sold any items. And that’s okay, because at this point, I’m doing it for myself to build an image so that when I leave Emerson, I can continue my career.

Marketing exposes Hansen to different fields and allows him to work in different companies. Hansen considers his interactions with other creative types to be the most valuable part of his job.

“Everyone in our Emerson bubble right now is all about networking,” Hansen said. “That’s what I do too [by] trying to have enough in my backlog and enough accolades and experience to justify selling vanity plates as my merch.

Hansen understands the unifying properties of commodities and how to market them. His products ultimately reflect a stylistic middle ground between him and the consumer.

“Our generation is in a very dense attention economy, and I don’t want to [designs] be intrusive, but I want people to notice things that I think are worth it,” Hansen said. “Each design is a kind of inside joke that I want everyone who buys it to feel like they’re a part of.”