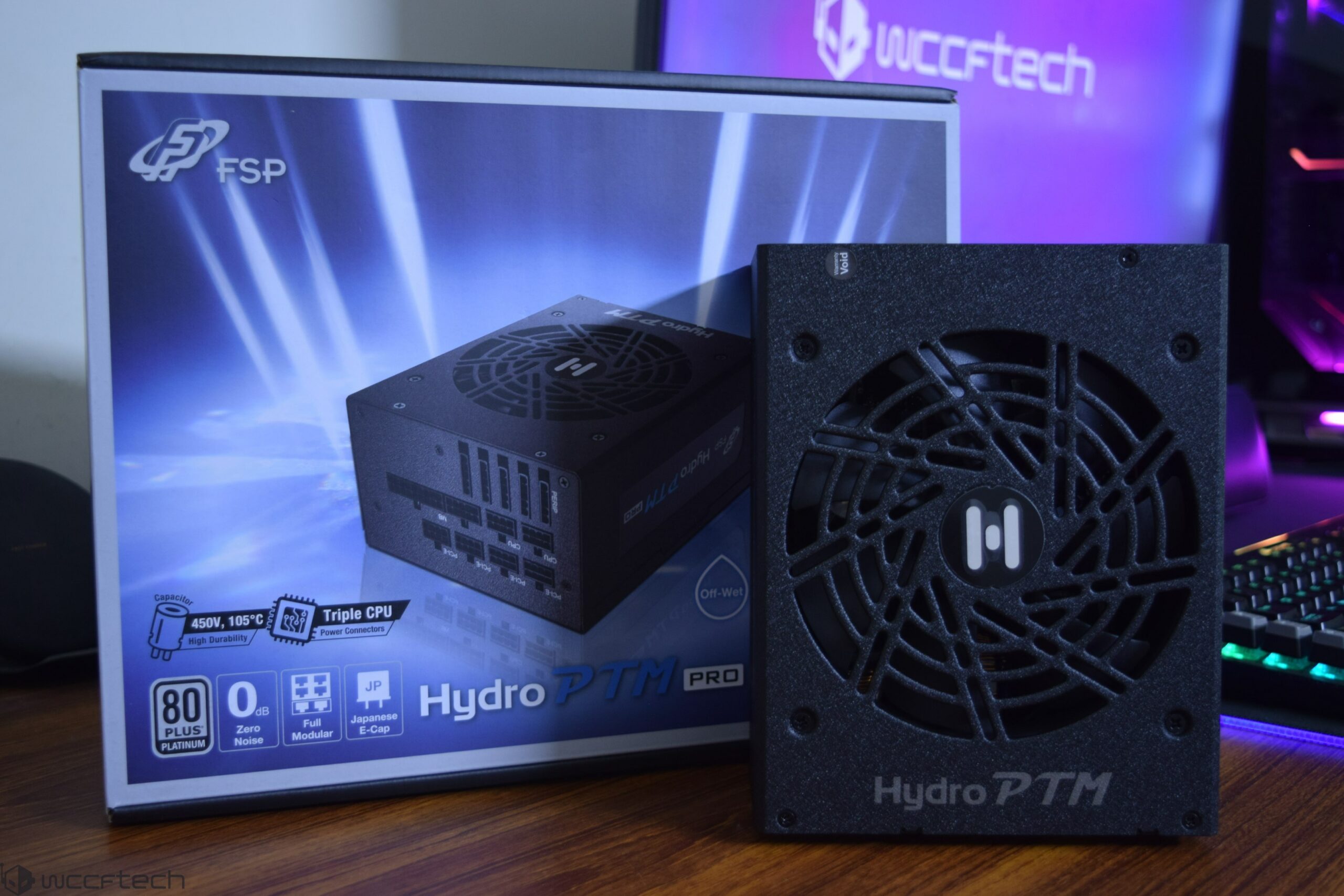 FSP, the manufacturer of high-end PSUs (Power Supply Units) currently offers its flagship design as part of its Hydro series. The company offers a huge range of options from 500W all the way up to 1200W. The family branding is interesting as it reads “Hydro”, however, there is only one High-end unit within the family that supports hybrid cooling as part of a collaboration with custom loop kit manufacturer, Bitspower.

The rest of the Hydro range sticks to the traditional air-cooled design. So, starting with our unit, we have the FSP Hydro PTM PRO 1200W unit which is an 80+ Platinum compatible power supply. It is a fully modular design like the rest of the Hydro PTM PRO series and comes with a conformal coating which adds to its durability, preventing it from carrying dust, stress or corrosion due to humidity. .

As for specs, the FSP Hydro PTM PRO unit we got offers a maximum DC output of 1200 Watts and active PFC. It is an 80 PLUS PLATINUM unit with a nominal efficiency of 87% to 90% (230V). The PSU is fully compliant with Intel C6 and C7 power states and has an operating temperature of 0-50°C. The power supply is fully IEC62638 certified.

Some protection features you get on FSP Hydro PTM PRO series power supplies include:

As for the PSU design, it comes in an ATX form factor and measures 150 x 85 x 190 mm while weighing 2 kg or 4.41 pounds. Cooling is provided by a top-mounted 135mm fan that features semi-passive fan operation. There is a switch on the back of the PSU indicating “ECO” which is used to disable fan operation resulting in slightly lower power consumption. The fan itself is a non-PWM and smooth dynamic bearing design. FSP ships the Hydro PTM PRO 1200W power supply with a 10 year warranty and is priced at $289.04 at Newegg. It is also found cheaper on Amazon for a price of US$254.88.

Some key features of the FSP Hydro PTM PRO series include:

The unit we received came in a large blue and black box with a picture of the power supply on the front. The front also lists several features such as its 0db Zero Noise ‘Eco’ mode, the use of Japanese electronic capacitors, support for triple CPU connectors and support for the latest processors. 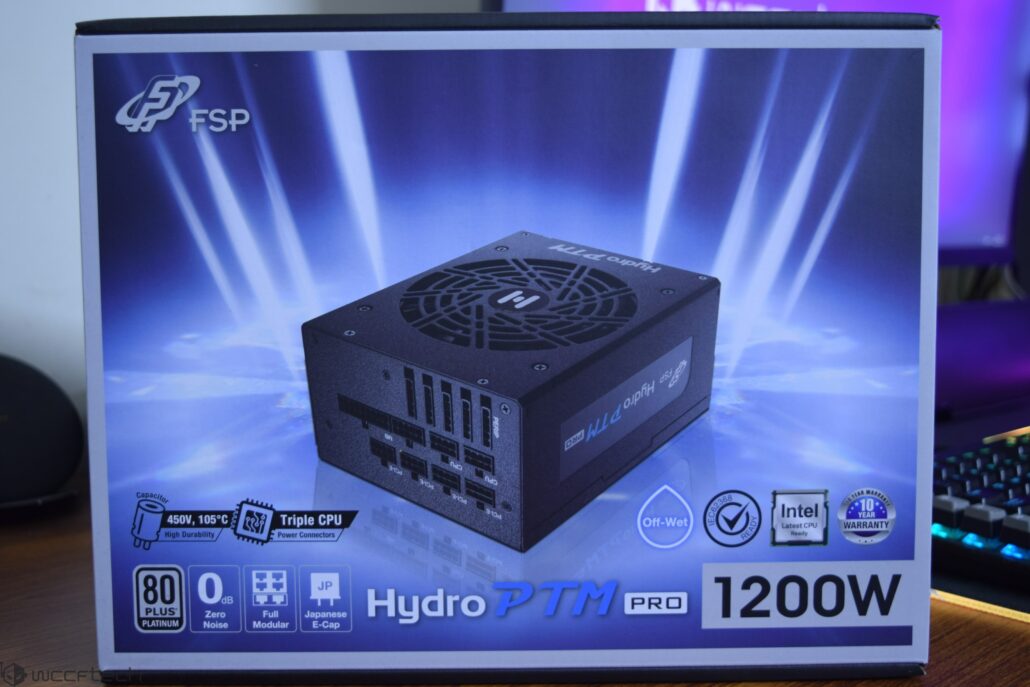 The back also offers a list of features that we detailed above and we’ll go into more detail in our teardown in a moment. 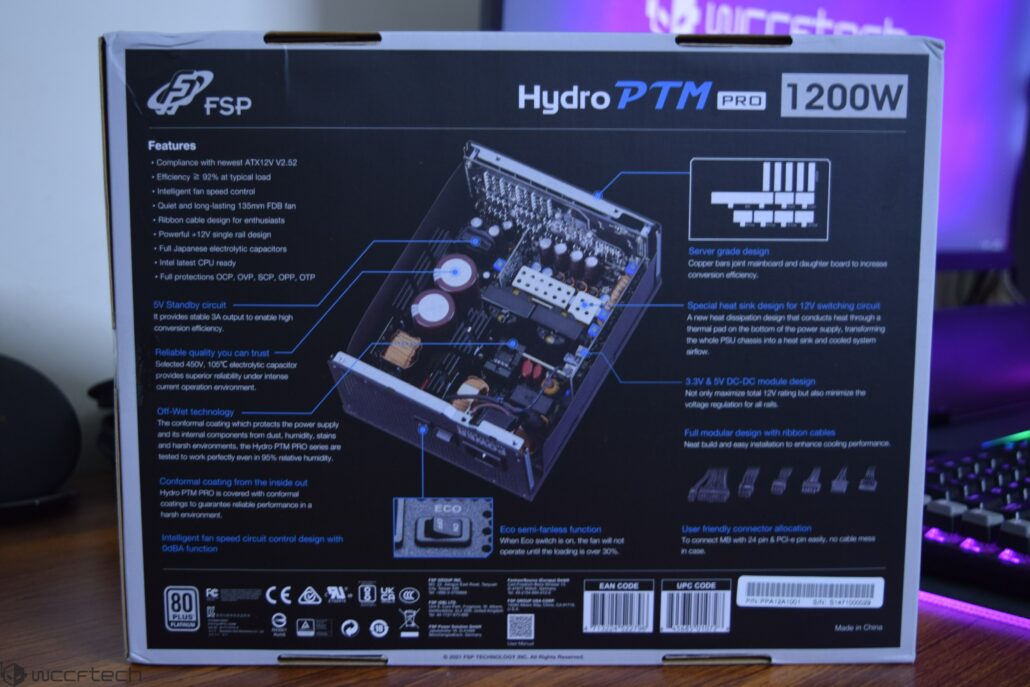 Opening the package reveals an interesting label that reads “Power Never Ends”, which is the main motto of the FSP Lifestyle brand. In the packaging, the PSU is held between foam wraps to protect it during shipping while the cables are supplied in their own separate pouch. There are also several stickers that can be placed on the sides of the PSU and a Hydro PTM Pro series guide. Four screws are also included with the power supply for installation in your case.

The PSU itself is packaged in a plastic cover. 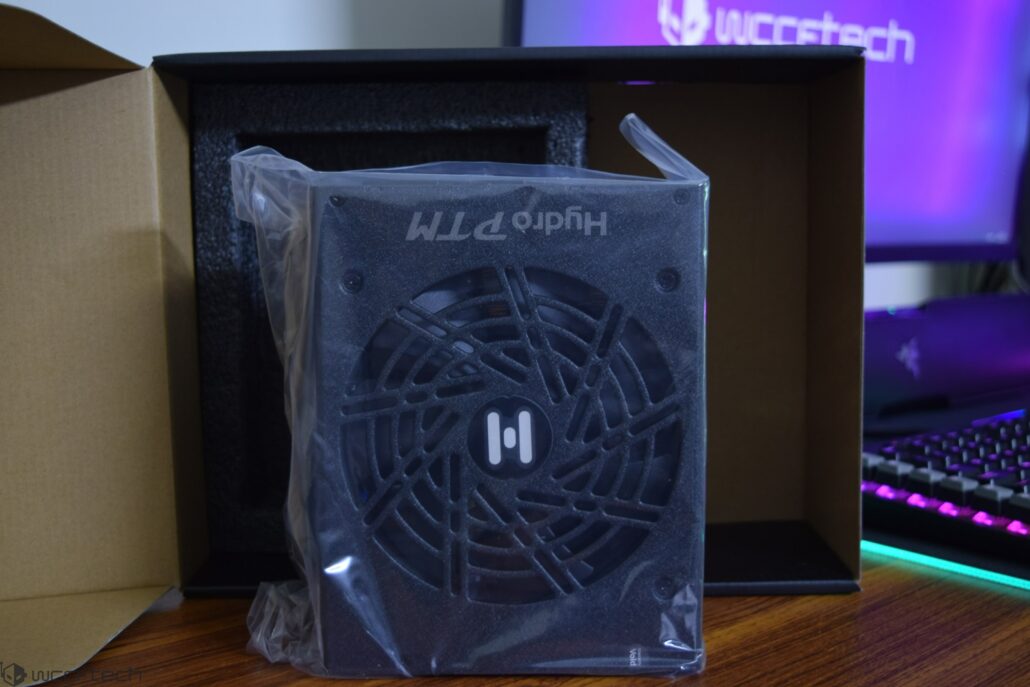 Looking at the power unit, we can see the use of conformal coating throughout the interior. The PSU also packs a lot of weight, which gives you an idea of ​​the specs of the quality components inside. 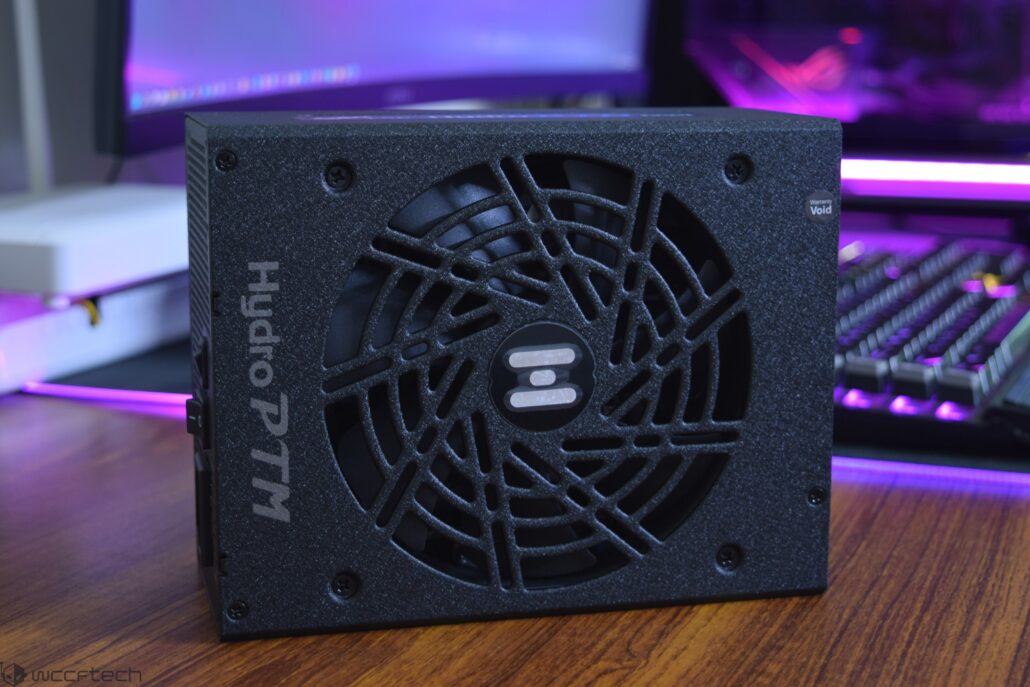 On the back, you can see the power jack, power switch, Eco mode switch, and a large mesh panel that acts as an exhaust vent. 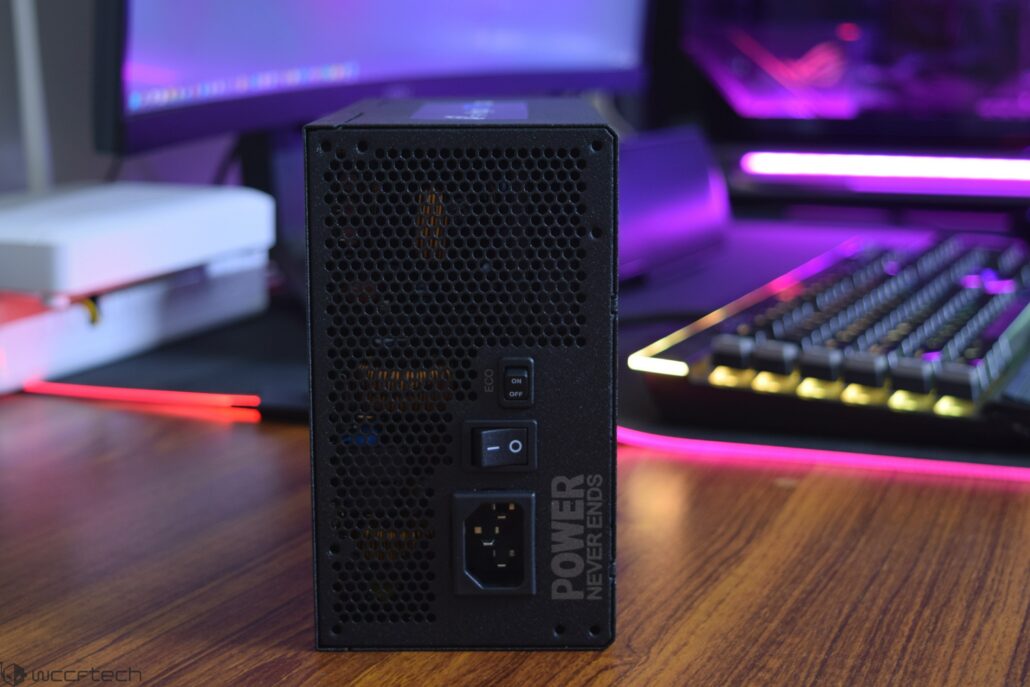 Now, depending on how you use the PSU, the bottom panel reads specs and power ratings. The PSU is rated to output a maximum of 100A and 1200W through the 12V rails. 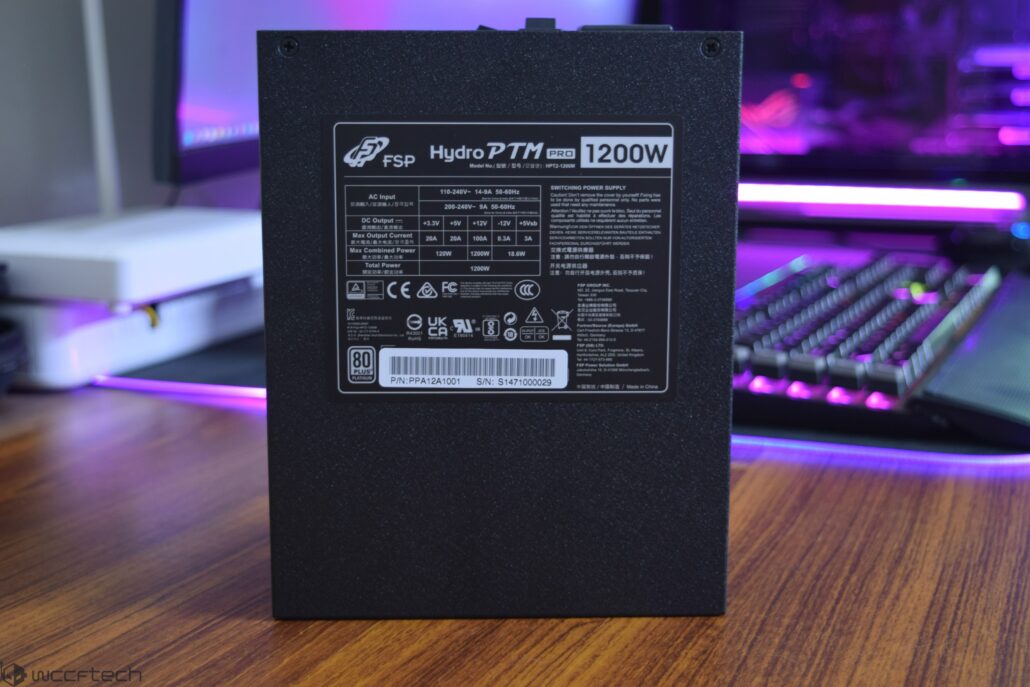 The sides of the PSU have a nice FSP Hydro PTM Pro logo which can be replaced with stickers in the packaging. 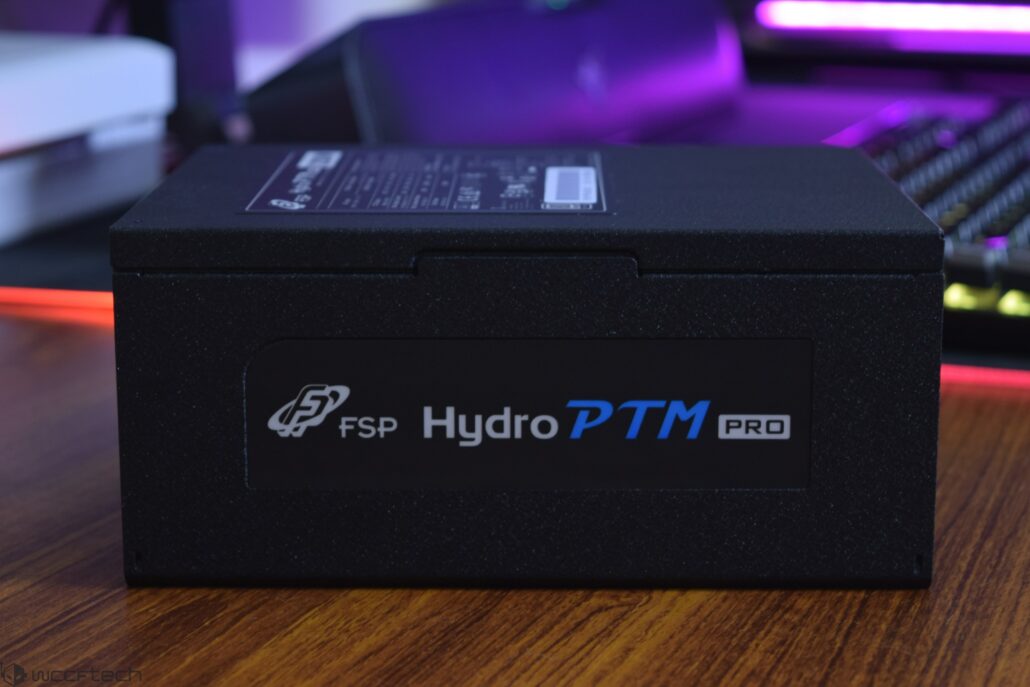 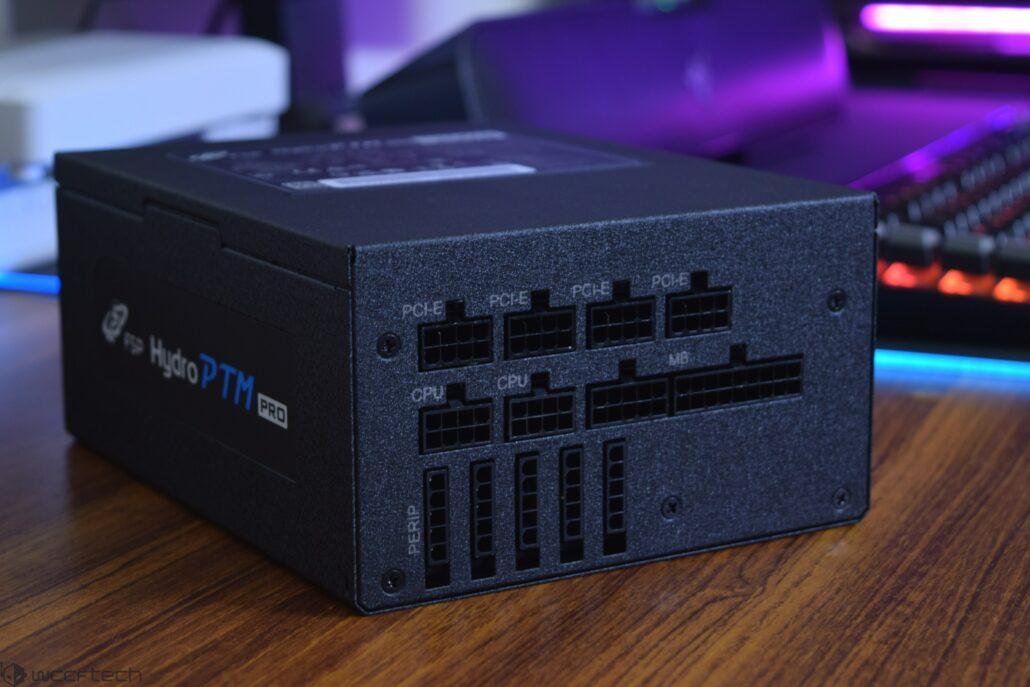 Opening the unit we are greeted with a very high end design using Infineon FETs and a mix of Chemi-con and Rubycon capacitors. There are also double bridge rectifiers that can handle up to 50 amps of current. The PFC controller is an ICE2PCS02G integrated circuit. There are also four FETs installed in a full-bridge topology which are controlled by the Champion CM6901T2X IC. As mentioned above in the specs, the PSU uses Japanese-grade capacitors which are a mix of electrolytic and polymer designs. The whole unit has high quality welding. There are also multiple heatsinks in the PSU that provide adequate cooling.

Finally we have the fan which is an MGA13512XF-A25 design from Protechnic Electric with a 12V 0.38A design and features a fluid bearing. 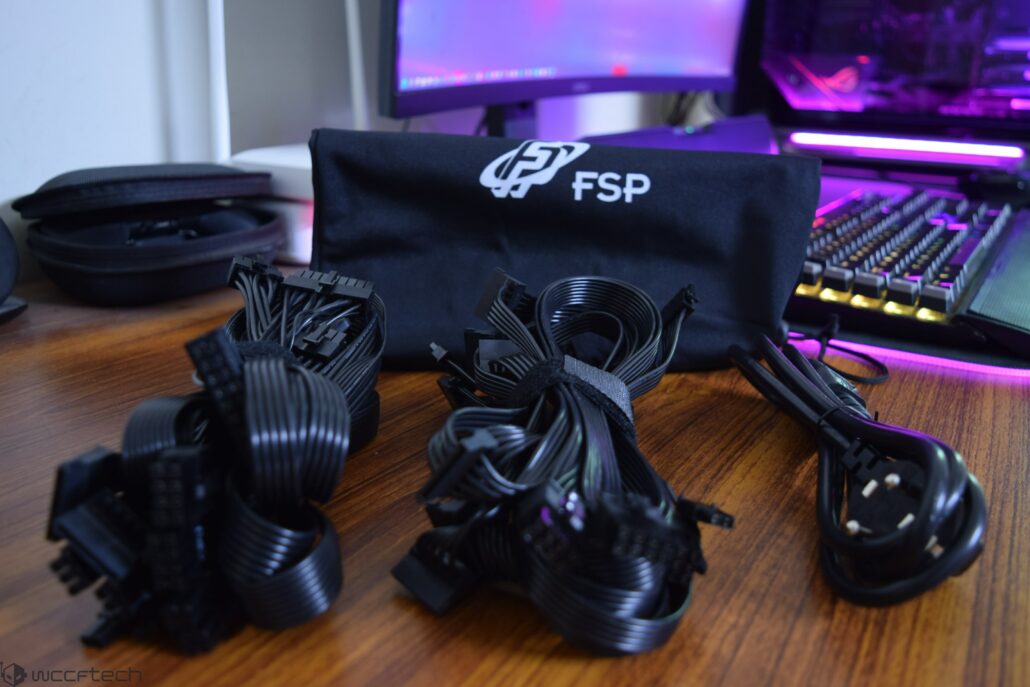 We’re at a point in the hardware market where the demand for power is constantly increasing and from what we’re hearing things aren’t going to stop. Enthusiast PC builders and high-end gamers are constantly aiming for the most premium products with CPUs consuming an average power of around 200 watts and GPUs now finding themselves around the 250-350W range. This, and all the hardware combined in a high-end rig, will get you close to 800-1000W power requirements. 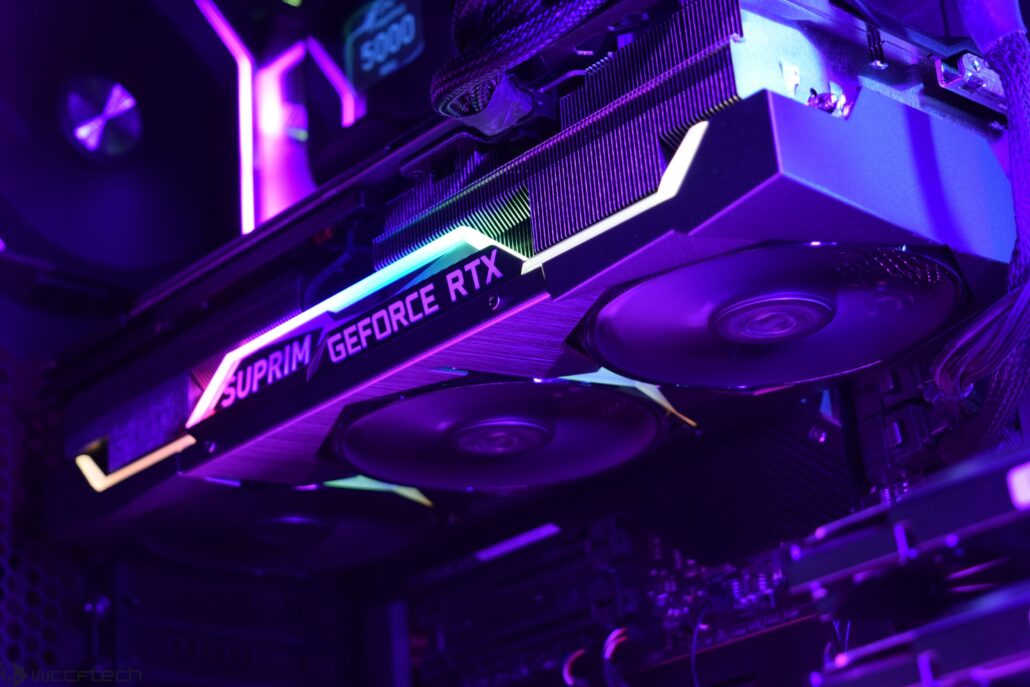 One of the highlights of this PSU is that, like all high-end 1000W+ models, it comes with four independent PCIe power connections. Why is this important? Well, future graphics cards are going to use the new Gen 5 connectors and you’ll either need to get a good Gen 5 PSU or a PSU with at least 3 connectors to keep up with the demand for high end cards new generation range. The RTX 3090 Ti requires 3 x 8-pin connectors to match the 16-pin connector it has on its PCB. Next-gen cards are expected to be 600W designs, so anything above 450W will require an array of four-pin to 8-pin connectors. You can now either buy an existing high-end power supply such as the FSP Hydro PTM Pro 1200W and adapt to the new standard, or get yourself a suitable power supply with Gen 5 connectors. Lucky for you, the FSP PRO PTM PRO series is currently being upgraded and a new variant will be launched soon with a PCIe Gen 5 connector. This eliminates the need to opt for a quad 8-pin to 16-pin adapter and is much better for cable management.

Overall, I think the FSP Hydro PTM PRO 1200W PSU is a very solid unit, handling our test bed without any issues stock and overclocked. Buying a 1200W PSU is always an investment that will last you a long time and you can’t go wrong with a solid design such as the FSP Hydro series which is currently around US$260 at retail outlets. .