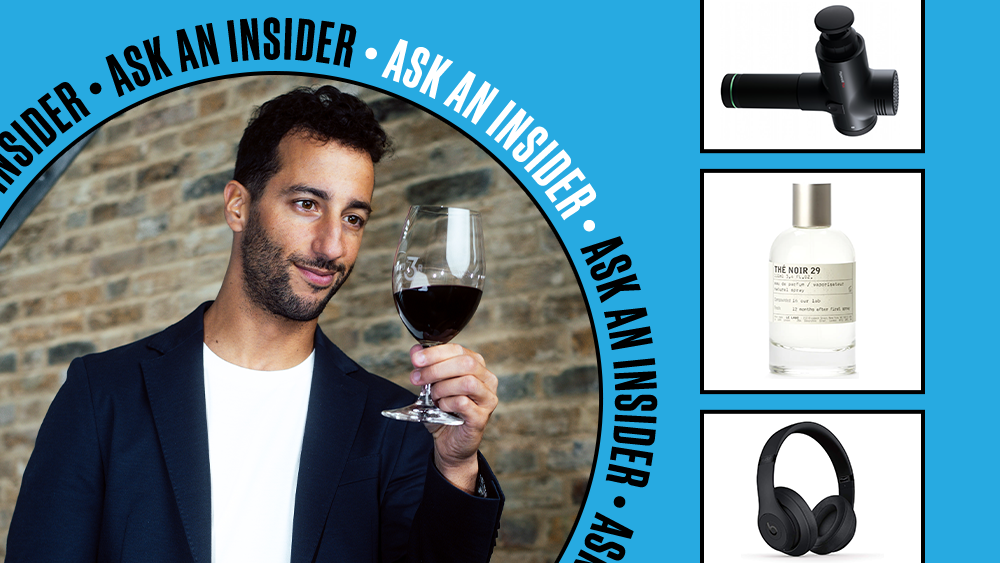 If you purchase an independently reviewed product or service through a link on our website, Variety may receive an affiliate commission.

From sound engineers and screenwriters to celebrity makeup artists and stylists, Variety’s “Ask an Insider” series asks the entertainment industry’s top pros to share their must-have essentials, for work…and for play. In this episode, F1 driver Daniel Ricciardo (and star of Netflix’s ‘Drive to Survive’) talks about his new wine with St. Hugo and five other must-haves he enjoyed throughout his summer vacation. .

Anyone who knows Daniel Ricciardo knows the F1 star is known as ‘Honey Badger’, an endearing nickname based on his reputation for fearlessness on the track. Throughout his eleven-year career, he encountered more than a few engine malfunctions, sticking clutches, pit stop errors, crashes and shunts – while going 190 miles per hour.

But if it was his bravery aboard a jet-powered speedster that led him to eight Grand Prix titles, it’s another trait that sets him apart from his competitors. “I’m a total perfectionist,” he says Varietyflaunting her famous two-story smile during a Zoom call in Los Angeles.

It is this attention to detail that is indisputably behind his success in every other industry he has ventured off the beaten path into: fashion, music, entertainment, crypto. After becoming the star of the Netflix F1 reality series ‘Drive to Survive’, Ricciardo has not only been partly credited with catapulting motorsport into a global obsession, but has built a personal brand at from his fame which grows as fast as he drives.

Ricciardo is in Los Angeles this week to promote the US launch of his DR3 X St. Hugo wine collection, which was previously only available for purchase in his home country of Australia. Vintages include a 2018 Coonawarra Cabernet Sauvignon and the DR3 x St Hugo 2020 South Australia Shiraz, priced at $70 and $80, respectively.

And no, he won’t make a “shoey” with his trademark vino. “I think it’s too good for that,” he laughs, casting an unusually sweet sideways glance at St. Hugo’s chief winemaker, Peter Munroe, seated next to him.

Maybe that was a silly question to ask. Who would celebrate the release of a premium vintage wine by pouring it into a sweaty shoe and drinking it – the disgusting winning custom that has become a hallmark of F1? But if anyone would, it’s Ricciardo, whose carefree humor (and lots and lots of shoes) is just one more reason for his stardom. In fact, viral videos of Ricciardo drinking champagne in his sweaty driving shoes could have been the first introduction to F1 for millions of fans who had never watched the sport until last year.

Having his own wine named after him might have given Ricciardo a more sophisticated shine, but he’s still having so much fun. “Awhatever I get involved in, I want to be passionate about it, and I want to have fun with,” he says, adding that his interest in wine began to kick in as he sat around the dinner table with his Italian family.

“Wine has always been part of my upbringing and my family – eating around the table, Sunday lunches at Nana and Nano,” he says. “These things were part of growing up and there was always wine on the table, sometimes homemade wine that my dad made with his dad. It was kind of the way I was raised and I’ve always been surrounded by it.

He wants you to know that he is not but a connoisseur (“I am a wine lover,” he insists). That being said, he brought his signature perfectionism to his new line of work. The constant back and forth with winemakers, the many hours of tastings, collaborating with designers to create an elegant label – it all requires the same detail-oriented muscles that Ricciardo flexes on the runway, sifting through data from past races or receiving feedback from engineers.

“It’s the crossover,” he said. “His the little details that matter.

“I had a lot of opportunities and requests [for brand partnerships] especially in the last few years but although the sport is international I’m obviously very Australian and love home and so the opportunity to do something with an Australian brand has put a little more emphasis on me. I met St. Hugo for the first time through the world of F1 and it was just perfect.

“I go with both [over-ear and earbuds] but when i run normally i go with the ears just because when we’re on the grid before the race, there will be broadcasts, they want to interview us, and it’s kind of my forbidden time and it’s my time to enter the zone, so the over-ear is more obvious and it’s a way for them to know that I’m listening to music, that I’m in my zone — it’s basically my way of saying don’t touch me. I also need to customize their and I got some cool little drawings and stuff, we had a bit of fun with that too. They are not subtle.

“The original for me was Santal 33, like that was the first one where I was like that stuff was sacrament good. But I like it Bay 19, Black tea. I would probably say Thé Noire is like my favorite lately. I also smelled Matcha Tea 26 the other daytime which was I mean was a bit more feminine, but I really liked it, that one was special.

“The neck is so important when it comes to staying in shape with F1, so having a specially designed neck harness helps train those muscles. We all love our strength and resistance training with this so I take it with me everywhere. You also need to keep training your neck.otherwise it loses its strength very quickly, so it’s a regular piece of equipment I’ll be using. It’s not the most fun, but it is definitely essential.”

“We will have a treatment on the road with masseuses and ‘physiotherapists’ but it is not always accessible because we travel so hypervolt massage gun is cool because you can literally being on the couch watching a movie and getting into your legs or your calves, or even your neck. I I love the Hyperice Hypervolt 2 Pro for relieving deep pain. It’s the perfect travel companion and it comes in a handy case that I throw in my backpack and go!”